Yiannis Gaitis is one of the earliest modernist painters of post-war Greece, and student of Konstantinos Parthenis, he presented his first show in his own home in 1945. The next one, held at the Parnassos Gallery in 1947 was met with mixed reviews because the work was considered controversial.
He moved to Paris in 1954 and then to Rome where he created the Gruppo Sigma along with Caniaris,Kessanlis,Kontos and Tsoklis. In the early 1960’s he shaped his most known feature, the “little man” , that became his trademark in his own style of neo-figurative painting. His work gained international acclaim and focused on the notion of the individual in the midst of a society in which individualism is lost. 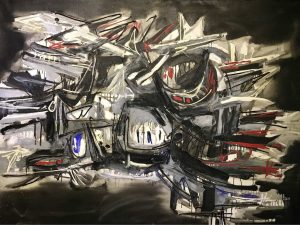